The calibrated 1D spectrum, mostly obtained by the summation of a series of recordings using data reduction programs such as IRIS & VSpec or MIDAS & OPA or MIDAS & SMS is a „curve“. Each pixel in the dispersion direction a light flux (Flux) is assigned (wavelength steps Angstrom / pixel). Colloquially, we would call it „intensity curve“. From left to right in the x direction the linearly increasing wavelength is assigned, and in the y direction the flux in ADU (arbitrary units).

The glowing gas at the surface (photosphere) of the star radiates the smooth linefree light like a „black body“ (continuum). The intensity distribution of that light obeys rawly the Planck’s law. Intensity and intensity-wavelength distribution of the black body radiation are strongly dependent on temperature.

Then the smooth photospheric continuum spectrum in the outer layers of gas of the star will be modified (under other physical conditions) by scattering, absorption and emission processes, which can be seen due to the low pressures in these layers usually as relatively sharp lines (absorption and emission lines, see eg the Fraunhofer lines of the sun). The star-light is then changed in the earth atmosphere (for example, scattering and terrestrial lines by absorption of water and oxygen molecules). These physically real starlight passes through our telescope, is dispersed in the spectrograph and the resulting spectrum is recorded by the CCD camera. The physical intensity distribution is superimposed the sensitivity of the CCD pixel. The sensitivity is quite variable for different wavelengths (see sensitivity curves of different CCD chips). Therefore, the measured raw spectrum not linearly corresponds to the actual physical distribution of intensity, but the plot in the y axis is a relative flux (albeit with knowledge of the „response function“ of the apparatus the relative flux can be converted).

Here we see the calibrated raw spectrum near the H alpha line of the supergiant eps Aur (spectral class FI). The dominant, relatively sharp H alpha line has an emission shoulder at the short wavelength edge component (these shoulders are very variable). The many sharp lines are water lines, caused by the water molecules in the lower atmosphere (humidity). The starlight continuum (the component of the black body) is clearly seen as constantly smooth curved line interrupted by the narrow absorptions and emission. But here caution is needed. The H alpha line center sits in a fairly flat broad bump (6550 to 6575 angstroms). That’s the photospheric H alpha absorption line. The sharp central absorption is due to the sorrounding gas shell.

The relative flux of the ordinate was determined in a rather unwieldy numbers around 25,000 ADU. This is simply the result of integration of pixel columns, which have formed the spectral strip in the spectrum extraction. With a gain of 2.3 e / ADU were involved about 2.3 * 25,000 = 56,000 photons causing the signal in the pixels.

Dividing all ADC values from the above figure by a constant number, here for example by 28,000 (the value at 6550 angstrom) the relative flux is normalized to values close to 1, without the spectrum is physically changed (it was only a linear transformation in the relative flux carried out). Up to this point have yet been any individually affected transformations. The spectrum is a pure measurement result (with the usual physical factors such as statistical effects, inaccuracies, etc.). 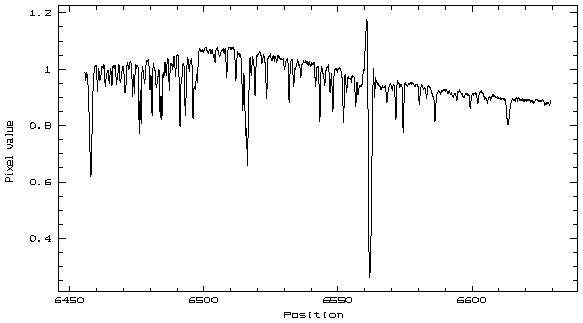 If one is interested in effects for the star continuum, the continuum of black body, play no role, we can eliminate the continuum. You only have to specify a continuum function, ie, it is formed by defining grid points that lie on the continuum. That’s a spline (function), which represents the continuum. Wherever be bridged the lines, we establish a quasi-continuum. It implicitly assumes that the continuum continues as assumed, although it has in these places do not really measured. The graph at left side shows such a quasi continuum in form of a solid line, let’s call it „nor“. It was created by clicking on several continuum points within a MIDAS procedure. The next step is normalization of the raw spectrum using this „nor“ by dividing the raw spectrum through „nor“.

Calculation of the normalized spectrum:

The result is shown in the graph below. Normalized Flux F / Fc is plotted against the wavelength. Now, throughout the continuum is on level 1 and the flux ‚F / Fc of the absorption lines are <1 and the emission components > 1.

Without knowledge of the normalization function ’nor‘ is the original spectrum no longer be reconstructable. Caution: the normalized spectrum is already an interpretation of the editor , because a non linear transformation of the measurement result (raw spectrum) is done by the observer with a bona fide set ’nor‘.

The normalization of the above calibrated raw spectrum was relatively easy because the continuum was highly visible. Here’s an example where this is no longer so trivial.

The H alpha line of zet Tau is in emission and also very wide. The rise flanks on both sides of the line run out wide, so that the establishment of the quasicontinuum „below the line“ requires some experience. It must be the „real“ spectrum of the star have in mind (literature).

In such broad emission lines is in the flanks the Raleygh-scattered light of the H alpha line. This is a light intensity that belongs to the H alpha emission and can not be omitted !

In the next example (the region around the H alpha line of lam Cep) is a normalization in good conscience carry out any more, because the line profile is much too complex. The establishment of a quasi continuum in the central part of the spectrum runs on arbitrarity.