With flats are to be eliminated mainly dirt effects from the recorded spectra.

Some information and a flat are shown already on the page data reduction. Other basic knowledge see Wikipedia.

In practice, the production of good flats is not trivial. For light source only line free lamps come into question. They are, for example light bulbs (halogen lamps). The light should take the same path as the starlight, so that all influences (dust, vignetting) are recorded properly. The flat therefore must be taken using the complete set how it is used for recording the spectra (telescope, spectrograph, slit width, grid position …). It would be ideal if the light used had a flat wave front like the starlight (lamp very far away) However this is not really feasible. An approximation to the ideal beam path is a featureless white surface (paper, cardboard, wall), evenly illuminated by a lamp, and placed far away as possible from the telescope.

In the case that the shadows of dust particles in the flat are not identical with those in the star image then during the correction by the flat artificial structures will be introduced into the spectrum (artifacts that significantly alter the „true“ spectrum). It is therefore dangerous to use flats, when the light path is not identical to that of starlight. The check is not easy.

Using a 60W light bulb (with frosted glass front). The lamp shines directly into the telescope, spacing about 40 cm from the front Schmidt plate of the C14. Exposure time 30s.

Using a 60W light bulb with diffuser surface. The lamp shines on a white sheet in front of the telescope.The white cloth serves as a second diffuser. Exposure time 60s.

Using a 60W light bulb with diffuser surface. The lamp shines on a white board which is about 80 cm before the telescope. Exposure time 180s.

Use of a fluorescent film in a frame that fits the telescope opening. Exposure time 360 s. 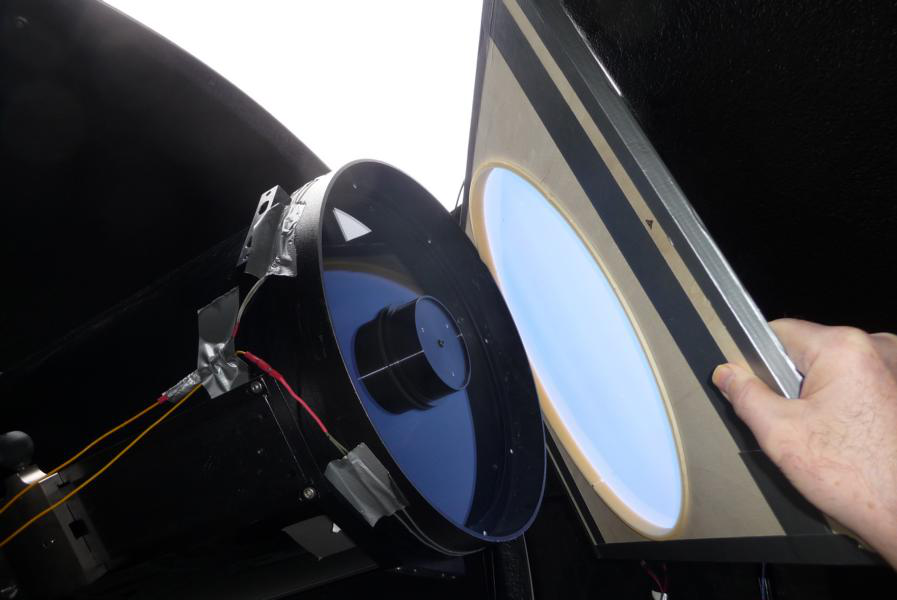 Some darkcorrected flats was averaged. Below are plotted two screen shots. They show the 3 flats (method 1 left, center and right methods 2 and 3). A horizontal or vertical row / column profile is selected in the middle flat, so that the huge dust ring is cut in the photo (profile = white line) . The profiles show the rippled brightness differences in the dispersion direction, which is seen in all 3 flats directly by eye.

The left flat shows some sharply depicted dust particles. The same shadows are in the other two flats available at exactly the same place, but represented as fuzzy rings. Obviously, the method 1 (the lamp shines directly into the telescope) is fundamentally different from the „diffuse“ methods 2 and 3. Because the dust particles are sharply imaged in method 1, the cone of light that falls locally on the CCD, has a much smaller angle of divergence as do the methods 2 and 3.

In comparison with methods 1 to 3, the flats according to method 4 are illuminated much more uniformly, as can be seen immediately from Figure below. The dust shadows are diffuse and the edge of the slit (below) quite sharp.

In the figure below the intensity curve of the pixel line 500 is plotted in two luminous foil flats recorded under the same boundary conditions. In the case of the flats, only the grid position was slightly adjusted (about 30 Angstroms). The wavelength-dependent intensity waves are shifted, but not the wide shadow of a dust grain around the pixel number 1300. As a consequence, separate flat images have to be taken for each grid position. 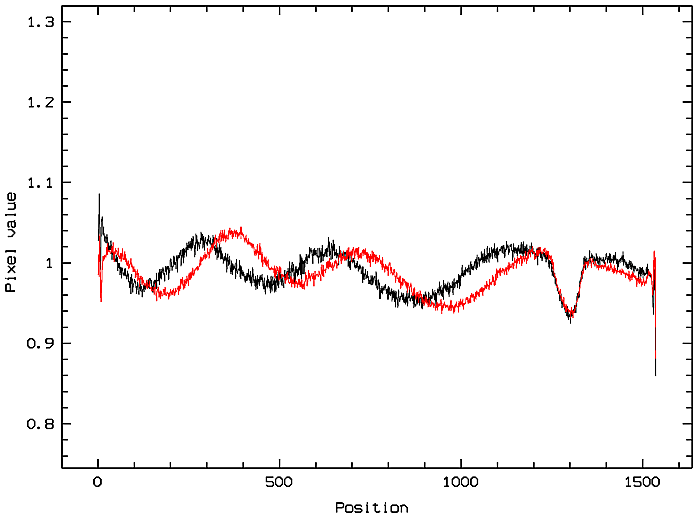 From these explanations it becomes clear that the use of unsuitable flat images can import significant artifact artifacts into the spectra. It is often better to take a short-exposed flat image at any grating position, locate the position of dust grains in the slit and on the optical surfaces, and select pixel lines that are free of such structures. When the star spectrum strip is then placed on these „clean“ pixel lines, the authors have found that the non-inclusion is often better than the inclusion of the flat in the data reduction routine.