When using SimSpec is the basic calculation and the adjustment to the existing telescope and the CCD camera is implemented, this raises the question of the detailed design. Now, as important aspects come into play, such as mechanical stability, adjustability, light leakage (stray light from the outside), weight (how much tolerates the focuser ?)…. 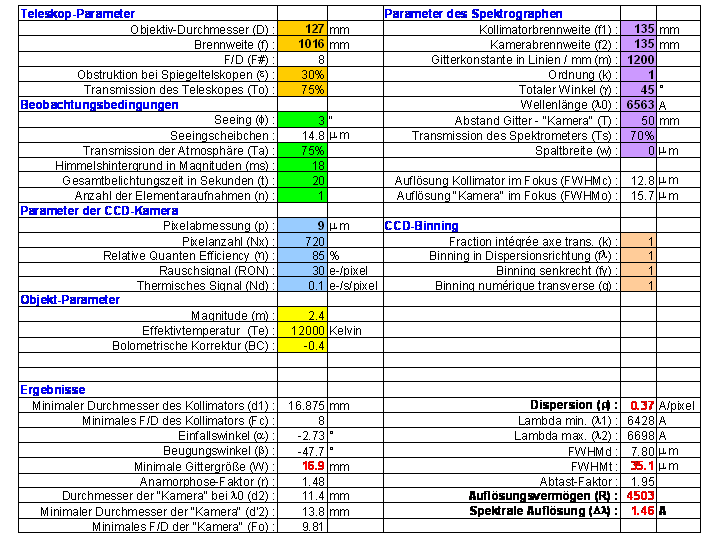 I must warn here: The beginners tend to underestimate certain „trivial“ facts. These include the weight problem, torsion effects by the moving telescope, external light comes through leaks in the housing, stability of the mount, wind influences, sufficient means for adjusting the system … failings in the planning phase no longer consider solvable problems in the practical handling. Such problems destroy the joy of spectroscopy! Therefore we will often build two spectrographs, the second one will take into account (hopefully), what is important.

My advice is to build spectrograph from aluminum. Wood is always working in its structures and we are often measure in wet nights when temperature falls during the night and dew formation occurs. Aluminum makes little thermal changing, it is specific lightweight and easy machinable, and relatively inexpensive. Be sure to look for sufficient rigidity. During an hour turns the polar axis of the mount by 15 ° and thus the orientation of the spectrograph on the Earth’s gravity! This caused changes in the geometry of the spectrograph can greatly disturb.

It is also important that all optically important distances and angles are adjustable as possible. So do not simply believe that the lines of a grating in its holder are exactly perpendicular to the optical axis of the collimator, just because you have designed it that way. It is better to be able to adjust this alignment mechanically with set screws. Similarly, collimator and camera along its optical axis must be movable to fractions of a millimeter – for proper focusing. With adjustment devices you are independent of small manufacturing errors.

Here is an example of experienced mechanical instabilities. My first slit-free spectrograph was attached by 2″ bush with 1-bolt clamp on the eyepiece of a 5″ Schmidt-Newtonian (Intes Micro MN 58). As a mount used was a HEQ-5 (see photo above left). The combination of instable mount (wind effects), not very stable attachment of the bush the instabilities of the spectrograph and housing were also raised during the spectra recording mechanical jumps. The graph shows 50 such consecutive recorded images of the H alpha emission line of zet Tau (as extracted raw spectra).

The spectra stripes jumps on the CCD along the dispersion axis to within a range of about 200 pixels and forth. Similar jumps also occurred in the y-axis, but here they are no longer visible because they are removed by the extraction of the spectra already. The rotation of the spectrograph / telescope within the 30 sec exposure time followed by a „trigger“ by the electro mechanical shutter of the Audine camera was enough vibration that in both axes of the CCD the spectra stripes was moved on. Jumping was then compensated by processing software (second graph below). The 50 scattered spectra in the above graph were correlated by the MIDAS script „OPA“ , so that in the dispersion direction are all congruent. The next step, they were added to a sum spectrum. This is a beautiful example of what can be corrected later with modern software inadequacies of the apparatus.

This mechanical instability has meant that the exposure times was limited to 30 sec. With this exposure I have had about 1 / 3 of the recordings due to jumps to sort out as useless. Longer exposure times lead to jumps within the exposure time and moving in two axes according to dual or multiple stripes of spectra. The „normal“ host series consisted of 50 to 100 individual images, therefore, à 30 sec. What was the consequence? At each frame is the normal noise of the signal the readout noise added. The result was the sum spectrum, obtained from all 30 to 70 usable shots, dominated by the readout noise. I had caught myself unnecessary noise, which did not occur in one or a few long exposures.

At my second aluminum spectrograph (LHIRES III) are avoided bushes and replaced by more stable screws. The new 100 kg-mount is much stiffer. In continuous shooting series are now no dislocations of the spectrum on the CCD chip to recognize more. The spectra stripes coincide exactly. And exposure times are from 5 to 60 minutes no longer a problem. The readout noise is now negligible.

In this example, I want to show that, in practice, not only the theoretical optical criteria play a the major role as they are calculated by SimSpec. The very simple things make the biggest problems. All practitioners within spectroscopists can sing that song, and everyone can contribute their own verses about this!